FIPS 140-2 Level 3 certified Hardware Encrypted USB 3.1 DeskTop Hard Drive with ultra-secure onboard PIN Authentication and capacities of up to 18TB.

Express Delivery, Free for orders over $299. 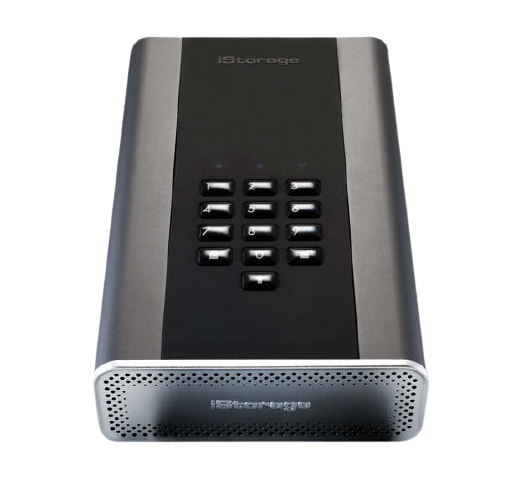 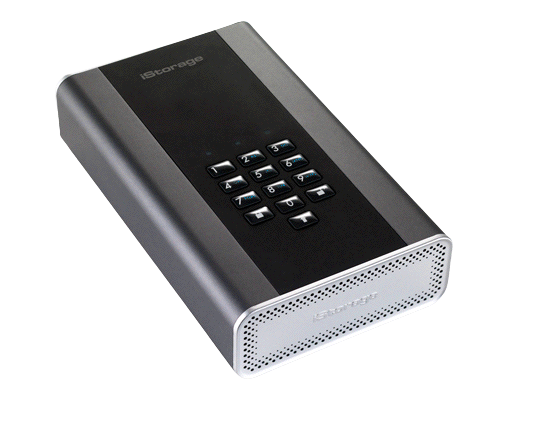 Your data is encrypted using FIPS PUB 197 validated, AES-XTS 256-bit hardware encryption. All components incorporated within the diskAshur DT² are completely covered by a layer of super tough epoxy resin, which is virtually impossible to remove without causing permanent damage to the components. The drive is also designed to be tamper evident making it obvious to the User if it has been pried open and tampered with.

The onboard keypad is covered with a layer of polymer coating that protects the keys and hides key usage to avoid tipping off a potential hacker to commonly used keys.

Independent User & Admin PINs make it perfect for corporate and government deployment. If the User forgets their PIN, the drive can be unlocked using the Admin PIN. The Administrator can then allow the User to set a new User PIN.

Simply enter a 7-15 digit PIN to authenticate and use as a normal external drive.

When the drive is disconnected, all data is encrypted using AES-XTS 256-bit hardware encryption (no software required).

The onboard keypad is covered with a layer of polymer coating that protects the keys and hides key usage to avoid tipping off a potential hacker to commonly used keys.

First 5 incorrect PIN entries: The drive will freeze, requiring the drive to be disconnected and reconnected to the USB port to get a further five PIN entry attempts.

Next 5 incorrect PIN entries: If the following five (10 in total) consecutive PIN attempts are entered incorrectly again, the diskAshur PRO2 will freeze again. To get a further and final five PIN attempts (15 in total), the “shift” button must be pressed whilst inserting the USB cable to the USB port and then an preset PIN will need to be entered.

Last 5 incorrect PIN entries: On the fifteenth consecutive incorrect PIN entry, the diskAshur PRO2 assumes it is being attacked and will delete the encryption key and lock itself, rendering all data previously stored on the drive as lost forever. At this point the drive can be reset to factory default settings and redeployed. 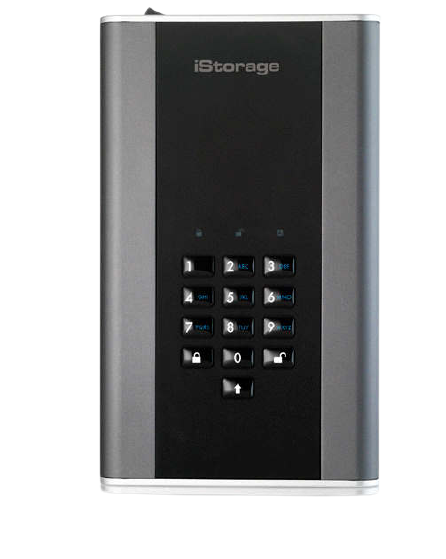 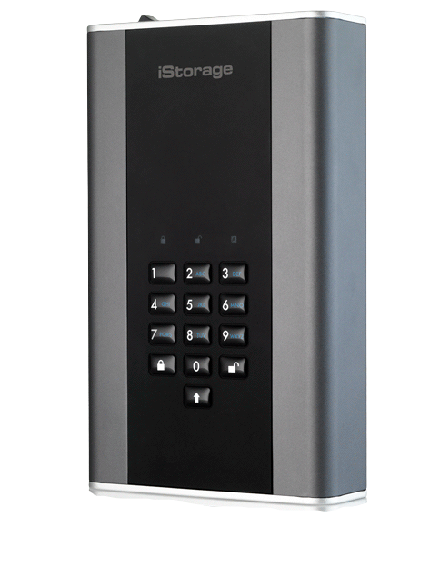 easy use and configuration

An admin configurable one-time User recovery PIN enables you to unlock the device and set a new User PIN in the event that you forgot the PIN.

The DiskAshur DT² is Operating System & Host independent, making it plug and play. No software required; the drive will work on any device with a USB port. USB Type C and Type A connectivity (included)

The DiskAshur DT² comes with added security features including Auti0Lock, Drive Reset, Self Destruct and Whitelisting on networks making your data inpregnable. 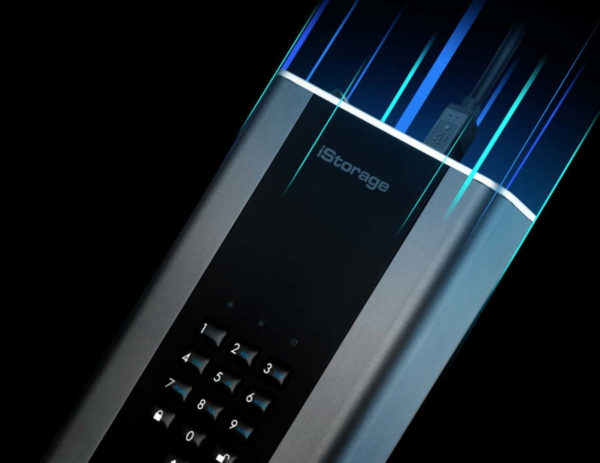 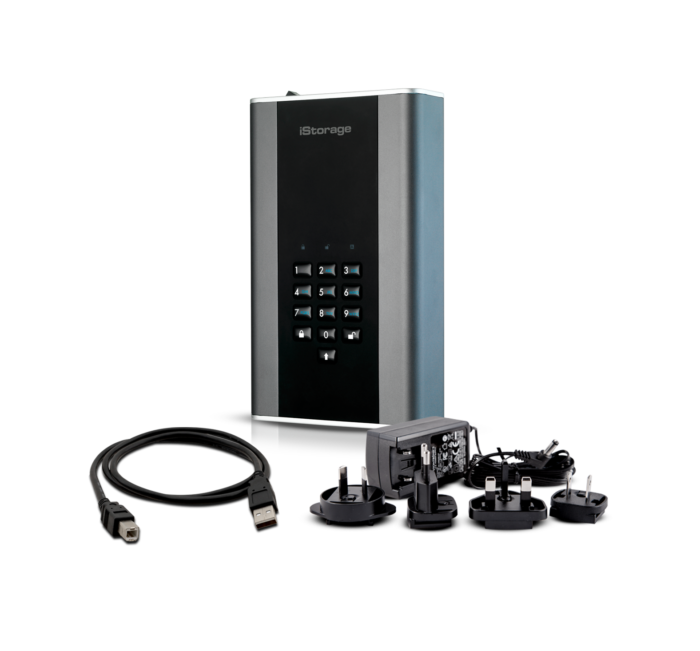 What Is the difference between all your devices?

What are the Detailed Product Specifications?

What is the Product Weight, Dimensions & Storage Capacity?

What is diskAshur DT2?

An easy to use ultra-secure, PIN authenticated, USB 3.1 desktop hard drive with capacities of up to 18TB and real-time AES 256-bit XTS hardware encryption, software free design and super-fast data transfer speeds. The diskAshur DT2 is certified to FIPS 140-2 Level 3, NCSC CPA (Foundation Level), Common Criteria and NLNCSA government accreditations. The diskAshur DT2 has an easy-to-use keypad design enabling you to securely access the drive with your own unique 7-15 digit PIN and with software free setup and operation, the diskAshur DT2 is platform/device independent and works across all operating systems including all versions of MS Windows, MacOS, Linux, Android, Chrome, Thin Clients, Zero Clients and embedded systems. In fact, it will work on any device with a USB port! One of the unique and underlying security features of the GDPR compliant diskAshur DT2 is the dedicated hardware-based secure microprocessor (Common Criteria EAL4+ ready), which employs built-in physical protection mechanisms designed to defend against external tamper, bypass attacks and more. Unlike other solutions, the diskAshur DT2 reacts to an automated attack by entering the deadlock frozen state, which renders all such attacks as useless. In plain and simple terms, without the PIN there’s no way in!

Offering advanced portable data security via built-in FIPS PUB 197 validated AES 256-bit XTS hardware encryption engine. The data encryption key is randomly generated by a Common Criteria EAL4+ ready Random Number Generator and protected by NCSC, FIPS and Common Criteria validated wrapping algorithms. Uniquely featuring a dedicated on-board Common Criteria EAL4+ ready secure microprocessor to enhance security through true random number generation and built-in cryptography. The security component employs physical protection mechanisms to protect itself from any external tamper, bypass laser attacks and fault injections and incorporates active-shield violation technology. More specifically, the secure microprocessor reacts to all forms of automated hacking attempts by entering the deadlock frozen state where the device can only restart through a ‘Power On’ reset procedure (i.e. power off/power on). The security lock feature protects the device against any unauthorised firmware modifications from the host side (fully protected against BadUSB). The diskAshur DT2 uniquely incorporates a secure microprocessor providing secure algorithms to encrypt both the data and the encryption key, giving you confidence that your data is protected to the highest standards at any given time.

Employing AES 256-bit XTS hardware encryption, the iStorage diskAshur DT2 seamlessly encrypts all data on the drive in real-time, keeping your data safe even if the hard drive is removed from its enclosure.

With super-fast USB 3.1 data transfer speeds of 225 MBps (Read) and 223 MBps (Write), you can now access your files faster than ever before. The iStorage diskAshur DT2 is also backwards compatible with USB 2.0 and 1.1 ports.

You can pre-program the diskAshur DT2 with your own unique Self Destruct PIN which, once implemented, instantly deletes the encryption key, all PINs, data and then creates a new encryption key.

The iStorage diskAshur DT2 also employs a useful drive reset feature, which can be implemented with a unique command. This clears all PINs and data, and creates a new randomly generated encryption key, enabling the drive to be reset and redeployed as many times as needed.

Set the unattended diskAshur DT2 to automatically lock after a pre-determined amount of time.

In addition to incorporating a secure microprocessor, encrypting the data and the encryption key, the diskAshur DT2 adds another barrier between your data and a hacker. All the components of the diskAshur DT2 are completely covered by a layer of super tough epoxy resin, which is virtually impossible to remove without causing permanent damage to the components. This barrier prevents a potential hacker from accessing the critical components and launching a variety of futile attacks.

All data, PINs, and encryption keys are always encrypted while at rest.