Express Delivery, Free for orders over $299.

The datAshur PRO allows you to safeguard valuable and sensitive data to ensure compliance with stringent data protection and confidentiality regulations and directives, such as GDPR, HIPAA, SOX, CCPA and more. 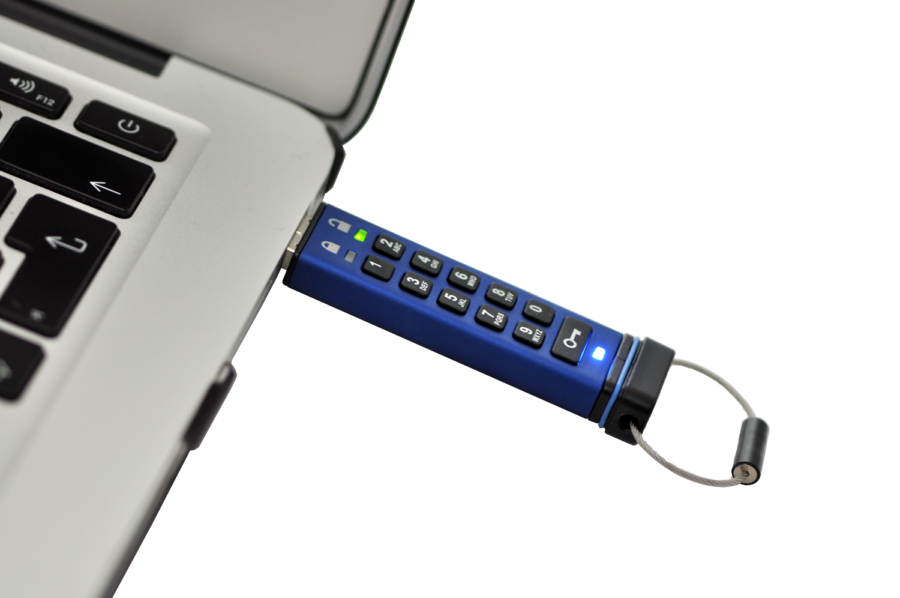 All data stored on the datAshur PRO is encrypted using FIPS PUB 197 validated, AES-XTS 256-bit hardware encryption. All components incorporated within the datAshur PRO are completely covered by a layer of super tough epoxy resin, which is virtually impossible to remove without causing permanent damage to the components. The drive is also designed to be tamper evident making it obvious to the User if it has been pried open and tampered with.

Independent User & Admin PINs make it perfect for corporate and government deployment. If the User forgets their PIN, the drive can be unlocked using the Admin PIN. The Administrator can then allow the User to set a new User PIN.

The datAshur PRO has brute force hack defence mechanisms ensuring your data is secured if someone incorrectly enters the PIN 10 times consecutively, and has been validated to the following government accreditation standards: FIPS 140-2 Level 3, NLNCSA DEP-V & NATO Restricted level.

Simply enter a 7-15 digit PIN to authenticate and use as a normal flash drive.

When the drive is disconnected, all data is encrypted (full disk encryption) using AES-XTS 256-bit hardware encryption (no software required).

The onboard water-resistant keypad is covered with a layer of polymer coating that protects the keys and hides key usage to avoid tipping off a potential hacker to commonly used keys.

The drive’s IP57 accreditation means it will survive being submerged under 1m of water for 30 minutes and deemed fit enough to withstand dust, dirt and sand. 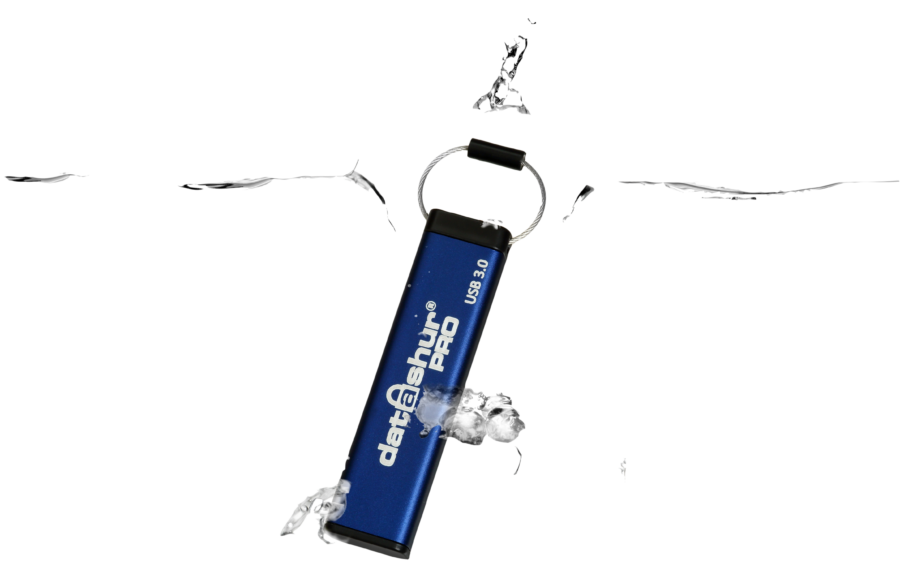 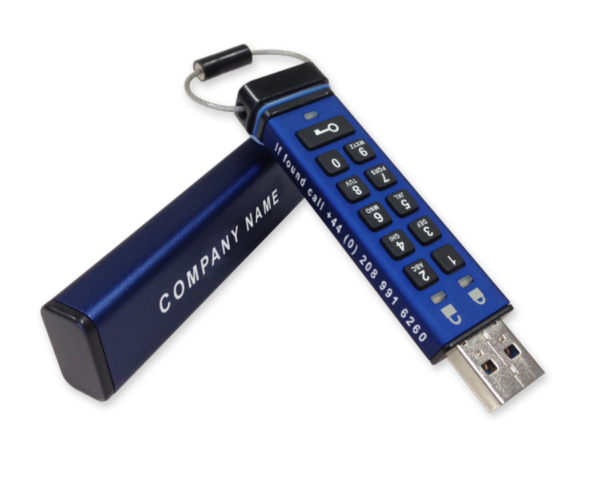 Transfer your files in seconds with the DatAshur Pro.

Customised your DatAshut Pro with your business name, logo or slogan etched on your drives. The possibilities are limitless.

easy use and configuration

No software required; the drive will work on any device with a USB port. 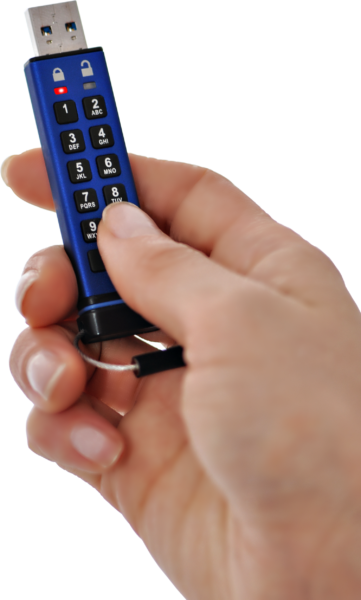 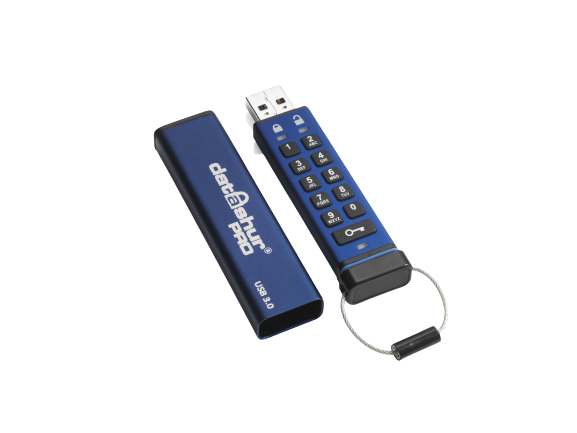 What Is the difference between all your devices?

What are the Detailed Product Specifications?

What is the Product Weight, Dimensions & Storage Capacity?

What is datAshur Pro?
The iStorage datAshur Pro is the world’s most secure, easy to use and affordable USB 3.0 flash drive, employing PIN code access with military grade XTS-AES 256-bit hardware encryption. The datAshur Pro incorporates a rechargeable battery allowing the user to enter a 7-15 digit PIN onto the on-board keypad before connecting the drive to the USB port.

All data transferred to the datAshur Pro is encrypted in real-time with the built in hardware encryption engine and is protected from unauthorised access even if your datAshur Pro is lost or stolen. The datAshur Pro automatically locks when unplugged from the host computer or power to the USB port is turned off and can be set to timeout (lock) after a predetermined amount of time.

The datAshur Pro operates straight out of the box, does not require any software or drivers to be installed and is compatible with Windows, Mac, Linux, Chrome, Android, Thin Clients and embedded systems. The datAshur Pro delivers drag and drop encryption, plug and play simplicity and can be used with any software.

The datAshur Pro can be configured with independent User and Admin PINs, making it perfect for corporate and government deployment. If the User forgets their PIN, the drive can be unlocked using the Admin PIN which will then clear the old User PIN and allow the User to set a new PIN. The datAshur Pro also incorporates a drive reset feature which clears both User and Admin PINs, deletes all data, creates a new randomly generated encryption key and allows the drive to be reused. The datAshur Pro is capable of generating an infinite number of randomly generated encryption keys, allowing the user to reset the drive as and when required.

As the iStorage datAshur Pro is unlocked via the on-board keypad and not via a keyboard, it is not vulnerable to software/hardware based key-loggers or brute force attacks. The datAshur Pro protects your data with a “Brute Force Hack Defence Mechanism”. If both Admin and User PINs have been created and a User enters an incorrect User PIN 10 (ten) consecutive times, the datAshur Pro’s brute force mechanism will trigger and the User PIN will be deleted. All data will remain on the datAshur Pro and can only be accessed by the Admin entering the correct Admin PIN. If Admin enters an incorrect Admin PIN 10 (ten) consecutive times, then both the User and Admin PINs, the encryption key and all data will be deleted and lost forever The datAshur Pro will then revert back to factory default settings and will need to be formatted before it can be reused.

The datAshur Pro is an investment that will last for years. Its rugged, extruded aluminium, water proof casing protects the drive against physical damage. The internal drive components are also sealed with a tamper proof coating.

Why choose datAshur Pro?
Did you know that millions of flash drives are lost or stolen every year and this figure is rising. Have you ever considered the impact of losing your non-encrypted USB flash drive? Your data would be at the mercy of anyone who stumbles across it.

Information Commissioner’s Office (ICO)
The Information Commissioner’s Office (ICO) now has the power to fine businesses and government bodies up to £500,000 for serious breaches of the Data Protection Act. This includes the loss of an unencrypted USB flash drive that contains client data. The ICO has been very clear in advising businesses and government bodies to encrypt all data that workers access, they also recognise that data which is encrypted and lost or stolen is not vulnerable to compromise.

General Data Protection Regulation (GDPR)
The European Union will soon have the power to fine companies €100 million or 2% of their annual turnover if they are found to be in breach of the new General Data Protection Regulation (GDPR). The forthcoming legislation compels anyone who holds data on EU Citizens to implement adequate security measures to protect data from loss or theft.

Loss of confidential data can have a devastating effect on both businesses and consumers. It could lead to a hefty fine, the downfall of a business, embarrassment, job losses and adverse media attention. The iStorage datAshur Pro can protect you against all of this.

The datAshur Pro cannot be brute force attacked
The datAshur Pro is not vulnerable to keyloggers as the PIN is entered on the unit rather than the keyboard
The datAshur Pro does not require any software and can be used on any Windows, Mac, Linux, Chrome, Android, Thin Clients and Embedded Systems.
Encryption is performed in real-time thus there is no speed degradation
No software or drivers are required